Works by Christ et al., continue to attest to the rejuvenating power of blood. For example, in the context of epigenetic pharmacology and regenerative medicine, one protein in the blood has been linked to health via nutrient-dependent amino acid substitutions that differentiate all cell types in all individuals of all species. Simply put, blood seems to reverse aging in another mammal, which suggests an across-species link to RNA-mediated amino acid substitutions. For contrast, nothing currently known about any species links beneficial mutations to health. That’s because mutations perturb protein. Mutations that perturb protein folding typically lead to pathology. Only evolutionary theorists continue to insist that beneficial mutations exist. Without them, their theories are based on nothing more than pseudoscientific nonsense.  For comparison to Christ’s works, see:

Abstract excerpt: We found that autosomal recessive TPP2 mutations cause recurrent infections, autoimmunity, and neurodevelopmental delay in humans. We show that a major function of TPPII in mammalian cells is to maintain amino acid levels and that TPPII-deficient cells compensate by increasing lysosome number and proteolytic activity. However, the overabundant lysosomes derange cellular metabolism by consuming the key glycolytic enzyme hexokinase-2 through chaperone-mediated autophagy. This reduces glycolysis and impairs the production of effector cytokines, including IFN-γ and IL-1β. Thus, TPPII controls the balance between intracellular amino acid availability, lysosome number, and glycolysis, which is vital for adaptive and innate immunity and neurodevelopmental health.

See also the graphical abstract below, which is from this URL 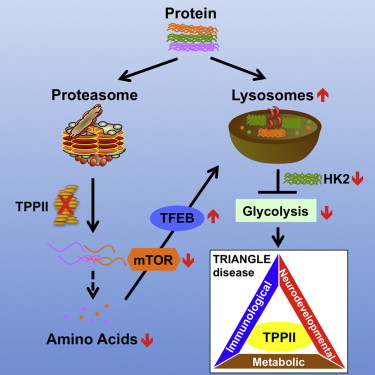 Caption: “A new form of immunodeficiency in humans caused by mutations in the enzyme tripeptidyl peptidase II reveals a new connection between amino acid homeostasis and immunometabolism.”

My comment: I reiterate, mutations perturb protein folding. In the report linked above, “…mutations cause recurrent infections, autoimmunity, and neurodevelopmental delay in humans.” Amino acid substitutions stabilize protein folding. See above: “…TPPII controls the balance between intracellular amino acid availability, lysosome number, and glycolysis, which is vital for adaptive and innate immunity and neurodevelopmental health.”

Controlled nutrient-dependent amino acid homeostasis is required for cell type differentiation in the context of epigenetic links from metabolic networks linked to genetic networks. These networks include what is known about immunometabolism, which links thermodynamic cycles of nutrient-dependent protein biosynthesis and degradation to organism-level thermoregulation via the de novo creation of olfactory receptor genes. The creation of these olfactory receptor genes enables receptor-mediated self vs non-self recognition. The de novo creation of any receptor requires systems level complexity that typically is dismissed by theorists and attributed to mutations.

However, in the context of one of Science Magazine’s 2014 Breakthroughs of the year, there are two reports that link nutrient-dependent RNA-directed DNA methylation and RNA-mediated amino acid substitutions in the blood from olfaction to regeneration of cells in tissues of organs and organ systems of mammals.

Editor’s Summary excerpt: Two teams analyzed the effects of heterochronic parabiosis in mice. Sinha et al. (p. 649) found that when an aged mouse shares a circulatory system with a youthful mouse, the aged mouse sees improved muscle function, and Katsimpardi et al. (p. 630) observed increased generation of olfactory neurons. In both cases, Growth Differentiation Factor 11 appeared to be one of the key components of the young blood.

Taken together, the works clearly link the experience-dependent nutrient-dependent de novo creation of olfactory receptor genes to increased olfactory acuity via the circulatory system in the context of regenerative medicine.

See Christ et al (2013). His group appears to have presaged the latest reporting on regenerating life by placing it into the context of nutrient-dependent RNA-mediated amino acid substitutions.

My comment: The amino acid sequences link the epigenetic landscape to the physical landscape of DNA in the organized genomes of species from microbes to man via conserved molecular mechanisms. See for examples: Nutrient-dependent/pheromone-controlled adaptive evolution: a model.

Christ’s amino acid sequences appears to be linked via the circulatory system to the nutrient-dependent stability of organized genomes. For example, the circulatory system of vertebrates and invertebrates links epigenetic effects on the nutrient-dependent pheromone-controlled physiology of reproduction to the bio-physically constrained fixation of amino acid substitutions via the chemistry of protein folding in species from microbes to man.

The question arises: “Has anyone credited Christ et al., with his group’s scientific breakthrough? It appears to have presaged another report of a 2014 Breakthrough of the Year. That breakthrough suppposedlly somehow links dinosaurs to the evolution of birds. Christ’s breakthrough makes the link from dinosaurs to birds untenable unless it is placed into the context of pseudoscientific nonsense touted by evolutionary theorists, which is based on de Vries definition of ‘mutation’ and assumptions that mutations could somehow be linked to increasing organismal complexity.

[W]hat Haldane, Fisher, Sewell Wright, Hardy, Weinberg et al. did was invent…. Evolution was defined as “changes in gene frequencies in natural populations.” The accumulation of genetic mutations was touted to be enough to change one species to another….  Assumptions, made but not verified, were taught as fact. Mazur (2014)

Given what is already known about The Pharmacology of Regenerative Medicine in the context of nutrigenomics and pharmacogenomics, which link metabolic networks to genetic networks, theories about beneficial mutations seem more ridiculous than ever. Christ’s works clearly show why heterochronic parabiosis leads to regeneration of cells in tissues of organs and organ systems of mammals. Regeneration is the likely outcome associated with blood-borne epigenetic effects on receptor-mediated events in all tissue types.

Others claim “…there is a lack of studies that demonstrate causal links between epigenetic change and tissue function.” They have also invented the term “allosteric mutations” in an effort to link something besides experience-dependent receptor-mediated changes in cell types to increasing organismal complexity manifested in biodiversity. They claim that biodiversity somehow evolved, but no experimental evidence of biologically-based cause and effect supports their claims.

Instead, we continue to see experimental evidence of how the Environment Drives Selection and Function of Enhancers Controlling Tissue-Specific Macrophage Identities. Experimental evidence shows that nutrient-dependent changes in the microRNA/messenger RNA balance link RNA-mediated amino acid substitutions to cell type differentiation, which is perturbed by mutations. Natural genetic variation enables ecological variation to lead to ecological adaptations via conserved molecular mechanisms. Everything currently known to intelligent serious scientists shows Tissue-Resident Macrophage Enhancer Landscapes Are Shaped by the Local Microenvironment and that epigenetic effects of food odors and pheromones shape the local microenvironment as exemplified in Feedback loops link odor and pheromone signaling with reproduction.

All biologically-based facts reported during the past year link feedback loops to A 3D Map of the Human Genome at Kilobase Resolution [that] Reveals [the] Principles of Chromatin Looping. Indeed, the reporting of the 2014 Breakthrough in regenerative medicine included a link to a video representation of the report on chromatin looping Reversing Aging Processes with One Protein: a 2014 Breakthrough

The likelihood that mutations, which perturb protein folding, contribute to anything but pathology appears to have been all but eliminated from the thoughts of intelligent serious scientists during the past year. For additional examples of what serious scientists now know about biologically-based cause and effect, see: A red meat-derived glycan promotes inflammation and cancer progression.

It may be important to remember that molecular mechanisms of nutrient-dependent pheromone-controlled cell type differentiation are conserved across all species. Human pheromone-deniers would rather you think that we have somehow escaped from bio-physical constraints on chemistry folding and cell type differentiation via amino acid substitutions. They will almost undoubtedly also continue to support the evolution industry’s claims that “…genomic conservation and constraint-breaking mutation is the ultimate source of all biological innovations and the enormous amount of biodiversity in this world.” (p. 199)  But watch the video linked above at least once to see how ridiculous that claim has become in the context of what is known about nutrient-dependent protein folding and pheromone-controlled gene expression. See also:Paternal Diet Defines Offspring Chromatin State and Intergenerational Obesity

I suspect that anyone who is not an evolutionary theorist will make even more scientific progress during 2015. Happy New Year! Indeed, forthcoming information about Epigenetic mechanisms underlying learning and the inheritance of learned behaviors also attests to the role of nutrient-dependent RNA-directed DNA methylation and RNA-mediated amino acid substitutions in cell type differentiation linked to learned behaviors in all species. This suggests that  If you learnt evolutionary biology and genetics a decade or more ago you need to be aware that those debates have moved on very considerably, as has the experimental and field work on which they are based. (p 1014)

Simply put, if you don’t begin to quickly learn in the new year what has been known to serious scientists for more than a decade, you are less likely to have a Happy New Year than those who remain biologically uninformed.