That is the basis for my claims about biophysically constrained viral latency. Moreover, all pathology is caused by the virus-driven degradation of messenger RNA.

This is another example of how proof of that fact is established and how the proof should have long ago eliminated the pseudoscientific nonsense touted by neo-Darwinian theorists and other academics who are biologically uninformed science idiots in the context of Richard Feynman’s claims about human idiocy.

Reported as: With these special bacteria, a broccoli a day can keep the cancer doctor away 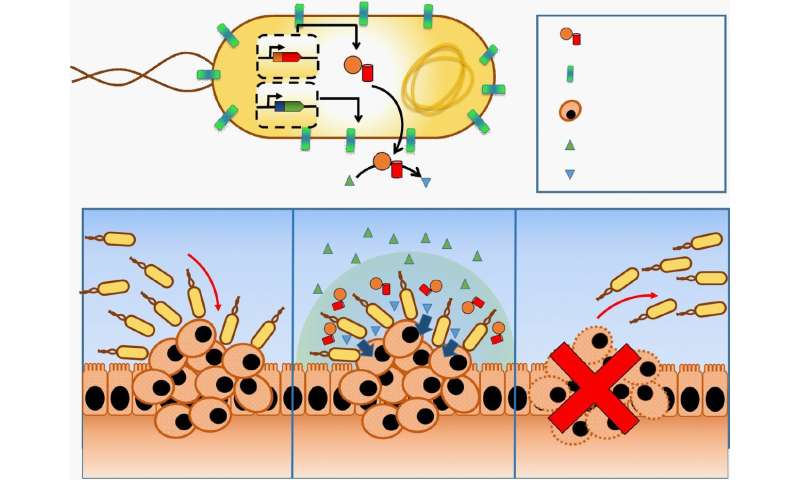 …turned a humble cocktail of bacteria and vegetables into a targeted system that seeks out and kills colorectal cancer cells.

Natural selection for food energy-dependent codon optimality links the food that organisms eat from the pheromone-controlled physiology of reproduction in the bacteria to our visual perception of energy and mass in the context of the biophysically constrained space-time continuum via the sense of smell in bacteria.

The link from the mouse model of enzymatically reduced tumour numbers by 75 percent to the death of more than 95 percent of colorectal cancer cells in a dish was predicted by the experiments Richard Lenski’s group reported as examples of evolution in bacteria. His experimental evidence proved that the food energy-dependent physiology of pheromone-controlled reproduction in bacteria was the key to all biodiversity.

Now is the time to consider the facts about dietary prevention and treatment to the theoretical nonsense touted in publications like this one:

Because the lac and tet systems evolved separately, the promoters that respond to LacI and TetR are tuned to transcribe downstream genes at rates appropriate to their original setting. This tuning incongruity can cause problems for synthetic biologists, as the transcriptional response of a promoter needs to match the synthetic context of the circuit.

The separate evolution of any two systems linked from top-down causation and ecological variation to the systems biology or energy-dependent cause and effect is not possible. Every aspect of systems biology is biophysically constrained. The virus-driven degradation of messenger RNA must be biophysically constrained by food energy and the pheromone-controlled physiology of reproduction in the context of ecological adaptations that require the transgenerational epigenetic inheritance of morphological and behavioral phenotypes.

We also developed a thermodynamic model that predicted the contribution of free energy of binding to the overall transcriptional initiation rate, which we measured in a fluorescence-based plate reader experiment.

Reporting that biologists created an energy-dependent tool kit that links thermodynamic cycles of protein biosynthesis and degradation from their model to the overall transcriptional initiation rate is akin to reporting that the biologists created what Schrodinger (1944) placed into the context of the anti-entropic virucidal energy of sunlight.

The inaccuracies of their ridiculous model were previously placed into the context of assumptions about the 2nd Law of Thermodynamics.

Reported as: Experiment shows that arrow of time is a relative concept, not an absolute one

The failure to link the conservation of energy via the 2nd Law of Thermodynamics to the thermodynamic interactions among subatomic particles represents the failure of all biologically uninformed theorists.

How to Counter the Circus of Pseudoscience by LISA PRYOR

The nature of evidence-based health care is that practices change as new evidence emerges.

The nature of biologically uninformed theorists and science journalists like Ed Yong and Carl Zimmer is to ignore all experimental evidence of virus-driven pathology and continue to tout their pseudoscientific nonsense.

The idea of biophysical constraints seems antithetical to the idea of nature somehow selecting mutations that cause amino acid substitutions. However, I am not a biophysicist or evolutionary theorist.

The problem may be my focus on nutrient-dependent receptor-mediated amino acid substitutions in species from bacteria to humans (non-viral organisms). Since I am not a virologist or physicist, I’m not sure that the laws of physics apply to viruses and their replication.

If they do, natural selection for random mutations is not likely to result in amino acid substitutions because the thermodynamics of changes in organism-level thermoregulation preclude such randomness. Stability of protein biosynthesis and degradation that probably depends on protein folding must somehow be controlled. Besides, I don’t know how random mutations in viruses could be naturally selected for inclusion in the human virome (or in the virome of any organism capable of thermoregulating its thermodynamic intercellular signaling).

If the Second Law of Thermodynamics does not apply to viruses, which means the chemical bonds that enable the amino acid substitutions can form at random and somehow be naturally selected, the details of biophysical constraints in this article seems out of place, since I do not think in terms of constrained random mutations and natural selection in mutation-driven evolution.

Hopefully, someone with a background in biophysics will address my confusion in case others are confused. In addition, I wonder if the consequences of understanding the evolutionary mechanisms that govern viruses extend to consequences important to understanding the evolution of species from bacteria to humans via constrained random mutations and natural selection?
————————————-
jvkohl replying to rsabharw • 7 months ago

The fixation of RNA-mediated amino acid substitutions is nutrient-dependent.

I did not suggest that natural selection caused the mutation because I am not a biologically uninformed evolutionary theorist.

I know the difference between an amino acid substitution and a mutation, which is something you probably should learn before claiming that anyone else is confused.