Summary: Virus-driven energy theft alters the interactions between physics and chemistry that maintain biophysically constrained biodiversity. That’s how viruses are linked from mutations to all pathology. Nutrient energy-dependent changes in the context of the pheromone-controlled physiology of reproduction biophysically constrain biodiversity via the fixation of amino acid substitutions in supercoiled DNA, which protects organized genomes from virus-driven pathology. 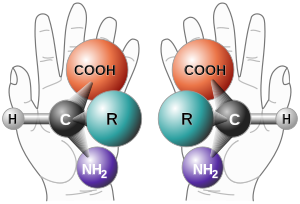 Two enantiomers of a generic amino acid that is chiral

The chirality of amino acids is energy-dependent and biophysically constrained by the physiology of reproduction in all living genera. For example, the substitution of achiral glycine in position 6 of the decapeptide gonadotropin releasing hormone (GnRH) stabilizes the organized genomes of all vertebrates by helping to protect them from virus-driven energy theft.

There is an internal transfer of a hydrogen ion from the -COOH group to the -NH2 group to leave an ion with both a negative charge and a positive charge.

Energy as information is placed into the context of the sun’s anti-entropic virucidal link from hydrogen-atom transfer in DNA base pairs in solutions. For example, as water in the ocean can be linked to all biodiversity via the physiology of reproduction and fixation of RNA-mediated amino acid substitutions in the supercoiled DNA of all living genera.

The difference between healthy longevity and pathology is viral latency. Unless the virus-driven energy theft is biophysically constrained by the anti-entropic virucidal force of the sun’s energy, life on Earth is not possible.

That fact helps to explain what is intuitively obvious to all serious scientists. They understand how the energy-dependent difference between bacteria and archaea links the degeneration of messenger RNA from bacteria to the degenerate mophological and behavioral phenotypes of archaea.

For comparison, see: From Fertilization to Adult Sexual Behavior

All differentiation in all cell types of all living genera exemplifies nutrient energy-dependent pheromone-controlled RNA-mediated polycombic ecological adaptation. That fact can be compared to the fact that virus-driven energy theft exemplifies the hecatombic evolution of all pathology. Both facts can be placed into the context of everything known about energy-dependent alternative splicings and amino acid substitutions in supercoiled DNA.

For comparison, see this representation of how “minimal mutational distance” might still be used by biologically uninformed theorists who do not know the difference between a mutation and an amino acid substitution:

Determining the Mutation Distance The mutation distance between two cytochromes is defined here as the minimal number of nucleotides that would need to be altered in order for the gene for one cytochrome to code for the other. This distance is determined by a computer making a pair-wise comparison of homologous amino acids (8).

The choice is perfectly clear. You can accept the claims of theorists who use computers to make “…a pair-wise comparison of homologous amino acids,” or accept the claims of serious scientists who have linked energy-dependent changes in hydrogen-atom transfer in DNA base pairs in solution to supercoiled DNA, which typically protects all living genera from virus-driven energy theft and all pathology.

This discussion attempt failed to convince anyone that Haldane, who was one of the theorists who helped to invent neo-Darwinism, was like all the others who knew nothing about biophysically constrained energy-dependent cell type differentiation.

What is your chain of logic (in your own words) that leads to your belief that energy = information?

—————————–
in·for·ma·tion
1. facts provided or learned about something or someone.
“a vital piece of information”
synonyms: details, particulars, facts, figures, statistics, data; More
2.
what is conveyed or represented by a particular arrangement or sequence of things.
“genetically transmitted information”

Conclusion: Energy and Information are two completely different things. They are NOT the same thing.

Claims that energy is not information, which are based on definitions, continue to frustrate the effort of intelligent scientists who are combating evolution to fight disease.

The casualties on the side of the serious scientists can be attributed to theorists and journalists who write articles with conclusions like this.

See: The queen does not rule

Division of labour is a human innovation, drawing on our ability to learn and improve by practice, and to trade goods and services. The growing recognition that natural processes work differently from our symphonies and armies will allow us to see the natural world more clearly. Ant colonies are not factories or fortresses; instead they use simple interactions to adjust to changing conditions. Ant societies, organised by distributed algorithms rather than division of labour, have thrived for more than 130 million years.

Division of labor is nutrient energy-dependent and pheromone-controlled via the physiology of reproduction in all living genera. For example XIST links differences in energy-dependent RNA-directed DNA methylation to chromosomal rearrangements and sex differences in species from yeasts to humans via the pheromone-controlled physiology of reproduction.

“We found that methyl modification is a normal feature of most RNAs in the cell,” he said. “This includes messenger RNAs that encode proteins, as well as noncoding RNAs such as XIST.”

Others have shown that energy-dependent changes in the microRNA/messenger RNA balance link methylation to every aspect of healthy longevity and that they link virus-driven energy theft to all pathology via the conserved molecular mechanisms of cell type differentiation in all living genera.

For one of 56,700 other examples see: MicroRNA-29 impairs the early phase of reprogramming process by targeting active DNA demethylation enzymes and Wnt signaling

…fundamental aspects of our experiences of conscious selfhood might depend on control-oriented predictive perception of our messy physiology, of our animal blood and guts. We are conscious selves because we too are beast machines – self-sustaining flesh-bags that care about their own persistence.

We are not self-sustaining. The real problem is the ignorance of theorists who have failed to tether their ridiculous theories to facts about Darwin’s “conditions of life” that have been detailed by serious scientists.

See also: Involvement of Host Non-Coding RNAs in the Pathogenesis of the Influenza Virus

See for comparison: My comment to the Science site and to the Atlantic site:

The idea of biophysical constraints seems antithetical to the idea of nature somehow selecting mutations that cause amino acid substitutions. However, I am not a biophysicist or evolutionary theorist.

The problem may be my focus on nutrient-dependent receptor-mediated amino acid substitutions in species from bacteria to humans (non-viral organisms). Since I am not a virologist or physicist, I’m not sure that the laws of physics apply to viruses and their replication.

If they do, natural selection for random mutations is not likely to result in amino acid substitutions because the thermodynamics of changes in organism-level thermoregulation preclude such randomness. Stability of protein biosynthesis and degradation that probably depends on protein folding must somehow be controlled. Besides, I don’t know how random mutations in viruses could be naturally selected for inclusion in the human virome (or in the virome of any organism capable of thermoregulating its thermodynamic intercellular signaling).

If the Second Law of Thermodynamics does not apply to viruses, which means the chemical bonds that enable the amino acid substitutions can form at random and somehow be naturally selected, the details of biophysical constraints in this article seems out of place, since I do not think in terms of constrained random mutations and natural selection in mutation-driven evolution.

My comment was removed from the Science site and this appeared:

The major antigenic changes of the influenza virus are primarily caused by a single amino acid near the receptor binding site.

My comment is still available from the Atlantic site