Viral ‘fossils’ in our DNA may help us fight infection

My comment: The work shows that Greg Bear accurately portrayed virus-driven energy theft when he linked it to the creation of new species. In 1999 and 2003, he linked what is now known about the anti-entropic effects of sunlight and hydrogen-energy transfer in DNA base pairs in solution to the creation of a new human subspecies.

What’s currently known outside the context of science fiction also links Einstein’s math and physics to molecular mechanisms of adaptation via Schrodinger’s claims about sunlight when paired with Dobzhansky’s claims about amino acid substitutions in the context of transgenerational epigenetic inheritance.

For example, the Zika virus clearly links primate craniofacial morphology and brain development. DNA damage linked to variations can be compared in the context of the fossil record and what is known about how cell type differentiation occurs. Nutrient energy-dependent RNA-mediated DNA repair and amino acid substitutions are linked to species-wide ecological adaptations.

The energy-dependent adaptations link ecological variation to morphological and behavioral phenotypes in species from microbes to humans. Virus-driven energy theft links a single amino acid substitution to increased virulence when nutrient-stress and/or social stress cause changes in pH that favor viral replication instead of nutrient-dependent immune system-support of controlled cell type differentiation.

Simply put, Dobzhansky’s claims can be placed into the context of what is known about all virus-driven pathology. He wrote: “…the so-called alpha chains of hemoglobin have identical sequences of amino acids in man and the chimpanzee, but they differ in a single amino acid (out of 141) in the gorilla ( p. 127)” — See: Nothing in Biology Makes Any Sense Except in the Light of Evolution

The “light” is sunlight and it is linked to hydrogen-atom transfer in DNA base pairs in solution to fixation of amino acid substitutions and supercoiled DNA by everything currently known to physicists, chemists, and molecular biologists about biophysically constrained chemistry and the nutrient-dependent biological basis of the physiology of reproduction in all living genera.

What some people call “viral fossils” are clear indicators of how the biophysically constrained chemistry of nutrient-dependent RNA-mediated protein folding prevents virus-driven entropy of organized genomes in the context of the physiology of reproduction. 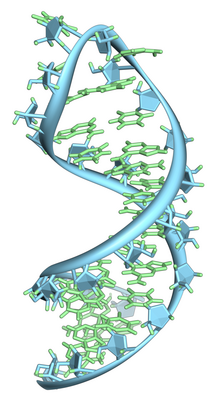 Caption: A hairpin loop from a pre-mRNA. Highlighted are the nucleobases (green) and the ribose-phosphate backbone (blue). Note that this is a single strand of RNA that folds back upon itself. 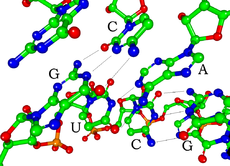 Caption: Watson-Crick base pairs in a siRNA (hydrogen atoms are not shown)

My comment: Perhaps if they had showed the hydrogen atoms, neo-Darwinian theorists would not have ignored hydrogen-atom transfer in DNA base pairs in solution, which link the sun’s biological energy to all biomass and biophysically constrained nutrient-dependent biodiversity.

A nucleotide is the basic structural unit and building block for DNA. These building blocks are hooked together to form a chain of DNA. A nucleotide is composed of 3 parts:
* five-sided sugar
* phosphate group
* nitrogenous base (nitrogen containing)
The sugar and phosphate group make up the backbone of the DNA double helix, while the bases are located in the middle. A chemical bond between the phosphate group of one nucleotide and the sugar of a neighboring nucleotide holds the backbone together. Chemical bonds (hydrogen bonds) between the bases that are across from one another hold the two strands of the double helix together.

Small intranuclear proteins also participate in generating alternative splicing techniques of pre-mRNA and, by this mechanism, contribute to sexual differentiation in at least two species, Drosophila melanogaster and Caenorhabditis elegans…. That similar proteins perform functions in humans suggests the possibility that some human sex differences may arise from alternative splicings of otherwise identical genes.

Organisms compete for food, heat, light and water. The innate immune system enables adaptations unless virus-driven energy theft overpowers the ability of organisms to reproduce in the context of their nutrient-dependent RNA-mediated protein folding chemistry, which links DNA repair to ecological adaptation in all living genera via what is known about supercoiled DNA in all living genera.

Building on her olfaction work, Bargmann has also studied the neural basis of social behavior, which in worms is strongly regulated by chemical cues. In one set of papers, for example, she identified a single neuron that integrates information from multiple chemical cues including food, oxygen and pheromones, to control the expression of social behavior.

A decade-old debate centers around the relative importance of protein versus regulatory changes and the role of gene duplication in the evolution of novelties [e.g., (3, 8)]. Although our findings point to a certain level of predictability in evolution, they also reveal a plurality of evolutionary responses to a similar selective pressure, which demonstrates how adaptive evolution can leverage a combination of gene duplication, regulatory changes, and protein evolution. The genetic basis of repeated adaptations can be further elucidated by considering contexts where diverse groups of species are faced with a common selective pressure, such as insect-host specialization; cryptic melanism; or environmental gradients in oxygen, salinity, temperature, or acidity.

My comment: The expression of social behavior in nematodes links everything known about how ecological adaptation occurs in the context of chemical cues including food, oxygen and pheromones, which must be linked to salinity, temperature, and acidity via hydrogen-atom transfer in DNA base pairs in solution to avoid making claims about evolution that cannot be supported by experimental evidence of biologically based cause and effect that links atoms to ecosystems.

Inside the secret defense systems of giant viruses

Excerpt: “Even if that search bears no fruit, Raoult thinks that MIMIVIRE is important for what it says about the evolution of giant viruses.

My comment: Did someone change the definition of life to include viruses that must steal energy from living cells to replicate? If so, I think the pseudoscientific nonsense about use of de Vries (1904) definition of “mutation” and the assumptions about how long it takes accumulated mutations to lead to the evolution of a new species is about to come to an end. No one I know is ignorant enough to claim that viruses are alive in conversation with a serious scientist.

“We are trying to fill the knowledge gap between the infection and potential neurological defects,” says first author Hengli Tang, the team’s virologist whose lab studies RNA viruses like Zika, Dengue, and hepatitis C virus. “The questions we address here are among the very first questions people want to know the answers of.”

The researchers noticed that the infected progenitor cells were not killed right away. Instead, the virus “hijacked the cells,” using the cellular machinery to replicate themselves, Song says. That helped the virus to spread quickly through the cell population, he says.  His team also reports that infected cells grew more slowly and had interrupted cell division cycles, which could also contribute to microcephaly.

My comment: I want someone to explain why they seem to know nothing about how nutrient-dependent microRNA flanking sequences prevent virus-driven entropy via energy-dependent hydrogen-atom transfer in DNA base pairs in solution that link physics, chemistry, and the conserved molecular mechanisms of cell type differentiation to the physiology of reproduction in species from microbes to humans.

Expression of genes is not only regulated at the level of transcription but also post-transcriptionally in various ways, of which regulation mediated by microRNAs is one of the most prevalent (He and Hannon 2004). MicroRNAs are 20- to 24-nt long noncoding RNAs that have been found in animals and plants. They play a pivotal role in development, tumorigenesis, the immune system, and during viral infections (for a review, see Bartel 2004). Within the RNA-induced silencing complex (RISC), microRNAs are responsible for target recognition by binding to target sites, often located in the 3′-UTR of mRNAs. This is predominantly mediated by the so-called seed region (nucleotides 2–8 of the microRNA). In general, RISC causes down-regulation of the target mRNA either by inhibiting translation or promoting degradation (Bartel 2009). Neither the exact mode of binding nor the mechanisms of down-regulation are completely understood (Eulalio et al. 2008; Kozak 2008; Guo et al. 2010; Djuranovic et al. 2011; Mishima et al. 2012; Meijer et al. 2013).

“These viral sequences have previously been linked to controlling early mammalian development and formation of the placenta, among other things.”

My comment: The other things link every aspect of RNA-mediated cell type differentiation from nutritional epigenetics to supercoiled DNA, which prevents virus-driven entropy of organized genomes.

My comment to “The Scientist”: See also:  Pan-neuronal imaging in roaming Caenorhabditis elegans

“We have long been recording behavior in worms, but we and others have concluded that, if you want to get physiologically relevant neural activity patterns, you have to look at neurons inside a behaving animal,” Samuel explained. “Only in that context are all feedback loops intact, where behavioral output modulates neural activity which, in turn, shapes behavior.”

As all serious scientists continue to link ecological variation to ecological speciation via nutrient-dependent pheromone-controlled reproduction in species from microbes to humans, my antagonists have all but disappeared.

Clearly, it is time to finally begin discussion of how virus-driven energy theft links hydrogen-atom transfer in DNA base pairs in solution from mutations to pathology instead of from nutrient-dependent RNA-mediated DNA repair via amino acid substitutions to supercoiled DNA, which protects organized genomes from virus-driven entropy.

See the response to my comment by Roy Niles:

Clearly, since viruses weren’t discussed in this article, it is not time to begin discussion of how Kohl supposes that virus-driven energy theft “links” hydrogen-atom transfer in DNA base pairs in solution from mutations to pathology, although I suppose if anyone could figure out exactly what “links” are in Kohl’s imagination, we might find that he has mistaken the interconnectness of all universal systems as directed or directional links.

And I presume he knows that pathology is the science of the causes and effects of diseases, in which case he seems to be assuming that all virus-driven systems are diseased.  But hey, this kind of thing is what he does.

My comment: If you start from any other approach to healthy longevity for comparison to virus-driven pathology, your imagination, opinions and/or findings will not reflect what is known by serious scientists. All serious scientists know they must link angstroms to ecosystems across all living genera via hydrogen-atom transfer in DNA base pairs in solution.

Only pseudoscientists make claims about how virus-driven energy theft is linked to the nonsense about neo-Darwinian evolution. The pseudoscientists refuse to acknowledge that viruses like the Zika virus prevent ecological variation from becoming ecological adaptation. Serious scientists have continued to claim that pseudoscientists are typically found among the foolish theorists who knows nothing about physics, chemistry, or biophysically constrained RNA-mediated amino acid substitutions and cell type differentiation in all living genera, which is controlled by the physiology of nutrient-dependent reproduction. And, people like Roy Niles take their cues from the pseudoscientists.