Is life the balance between quantum and classical physics?

HomeIs life the balance between quantum and classical physics? 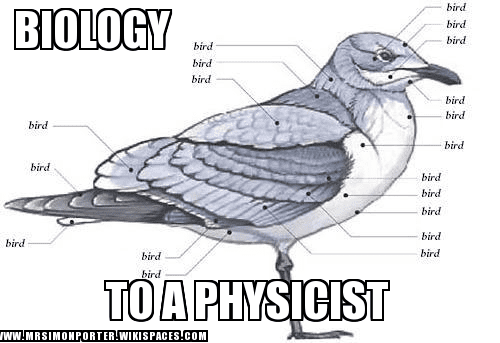 If life hangs in the balance between quantum and classical physics, the anti-entropic effect of the sun’s biological energy is what keeps it hanging, albeit not indefinitely.

Until you consider the fact that viruses link entropic elasticity to genomic entropy in all genera, you may not realize that your life hangs in the balance between pseudoscientific nonsense about mutations and facts about the biophysically constrained nutrient-dependent RNA-mediated protein folding.

Protein folding links physics and chemistry to biology via everything know to serious scientists about molecular epigenetics and nutrient-dependent fixation of amino acids that stabilize the organized genomes of all genera. Viruses perturb protein folding, which links them from entropic elasticity to genomic entropy — not from mutations to evolution.

Does a delicately orchestrated balance between quantum and classical physics distinguish living from nonliving things?

Re: in his 1994 book, What is Life?, Schrödinger proposed that genes had an organized molecular structure, which he called an aperiodic crystal, and were therefore subject to quantum laws.

Indeed, in the case of higher animals we know the kind of orderliness they feed upon well enough, viz. the extremely well-ordered state of matter in more or less complicated organic compounds, which serve them as foodstuffs. After utilizing it they return it in a very much degraded form -not entirely degraded, however, for plants can still make use of it. (These, of course, have their most power supply of ‘negative entropy’ the sunlight) – Schrödinger (1943)

The anti-entropic force of light can be linked from the slowing of its speed on contact with water to all of life’s biophysically constrained chemistry of nutrient-dependent RNA-mediated protein folding by the amino acid substitutions that differentiate all cell types of all individuals of all genera.

Fixation of the amino acids is manifested in nutrient-dependent ecological adaptation in the context of the physiology of reproduction and chromosomal rearrangements. For example, see: Estrogen receptor α polymorphism in a species with alternative behavioral phenotypes.

The link from microbes to vertebrates, includes humans. The honeybee model organism may be the best “bridge” to understanding the similarities in the birds and the bees.

Luca Turin’s works began to link quantum smell to quantum consciousness in the mid 1990’s and the sequencing of the octopus geneome links his works via olfaction from octopuses to crustaceans insects to mammals via conserved molecular mechanisms and symbiosis.

Symbiosis is the ultimate across species example of the anti-entropic force of sunlight. Facts that link physics to chemistry and biology via molecular epigenetics have forced revision of the “Modern Synthesis.”

Theorists are scrambling to make it appear that they still may have some semblance of credibility despite their failure to link anything known about viruses and entropic elasticity to genomic entropy via the accumulation of viral microRNAs. The viral microRNAs perturb protein folding and leads to all pathology when nutrient-dependent microRNAs are not available to support DNA repair mechanisms. DNA repair was linked to a single transcription factor in Heterotypic Signals from Neural HSF-1 Separate Thermotolerance from Longevity

…it was hypothesized that hsf-1 regulates the aging process by modulating chaperone network components to directly influence the folding state of the proteome ( Morimoto, 2008). Our data suggest an alternate method by which hsf-1 can regulate the aging process. In this model, hsf-1 activates the FOXO transcription factor, which initiates a pro-longevity stress response that is distinct from the heat shock response.

This atoms to ecosystems model links the aging process and anti-aging to a single transcription factor that coordinates different stress response pathways in all cell types that enables organism-level thermoregulation via thermodynamic cycles of protein biosynthesis and degradation that are nutrient-dependent and RNA-mediated via the physiology of nutrient-dependent reproduction.

Abstract: This atoms to ecosystems model of ecological adaptations links nutrient-dependent epigenetic effects on base pairs and amino acid substitutions to pheromone-controlled changes in the microRNA / messenger RNA balance and chromosomal rearrangements. The nutrient-dependent pheromone-controlled changes are required for the thermodynamic regulation of intracellular signaling, which enables biophysically constrained nutrient-dependent protein folding; experience-dependent receptor-mediated behaviors, and organism-level thermoregulation in ever-changing ecological niches and social niches. Nutrient-dependent pheromone-controlled ecological, social, neurogenic and socio-cognitive niche construction are manifested in increasing organismal complexity in species from microbes to man. Species diversity is a biologically-based nutrient-dependent morphological fact and species-specific pheromones control the physiology of reproduction. The reciprocal relationships of species-typical nutrient-dependent morphological and behavioral diversity are enabled by pheromone-controlled reproduction. Ecological variations and biophysically constrained natural selection of nutrients cause the behaviors that enable ecological adaptations. Species diversity is ecologically validated proof-of-concept. Ideas from population genetics, which exclude ecological factors, are integrated with an experimental evidence-based approach that establishes what is currently known. This is known: Olfactory/pheromonal input links food odors and social odors from the epigenetic landscape to the physical landscape of DNA in the organized genomes of species from microbes to man during their development.