Life in your UV light-constrained galaxy

A measurement of the z = 0 UV background from Hα fluorescence

Despite the substantial systematic uncertainty that affects our measurement, our work has demonstrated the potential that future MUSE observations have in constraining the intensity of the UVB in the local Universe.

This is a report on the Multi Unit Spectroscopic Explorer (MUSE) instrument. The preposterous claim is not supported with experimental evidence that observations made in the context of the instrument somehow constrain the intensity of UV light.

That unsupported claim is worth placing into the context of other preposterous claims about the mutation-driven evolution of all biodiversity on Earth.  See: Mutation-Driven Evolution

The picture below represents facts about UV light that link energy-dependent changes from angstroms to ecosystems in all living genera via the physiology of reproduction. 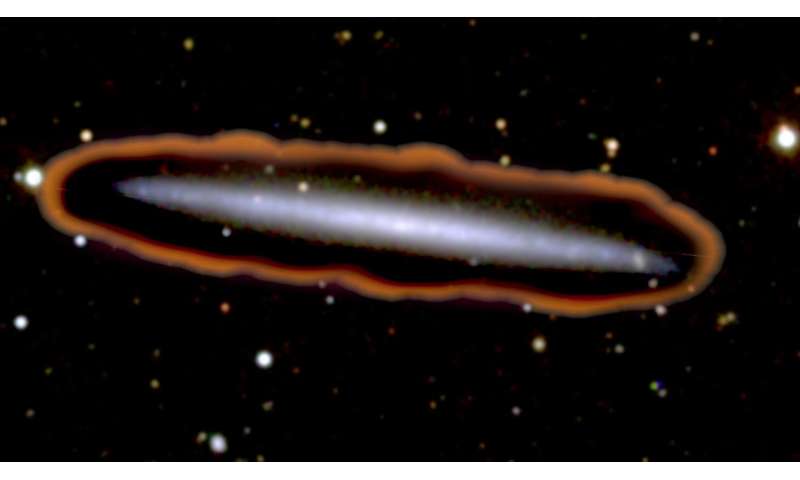 Galaxy UGC 7321 is surrounded by hydrogen gas, and as this gas is irradiated with UV radiation, it emits a diffuse red glow through a process known as fluorescence. This image shows the light emitted by stars inside the galaxy, surrounded by a red ring that represents the fluorescent emission induced by the UV radiation. Credit: M. Fumagalli/T. Theuns/S. Berry

Simulations show that there should be more small galaxies in the Universe, but UV radiation essentially stopped them from developing by depriving them of the gas they need to form stars.

I saw no mention of the missing galaxies until 3/21/17. I only knew that the anti-entropic virucidal energy of ultraviolet light biophysically constrains all life on Earth via nutrient energy-dependent endogenous RNA interference and the physiology of pheromone-controlled reproduction.

Observers tell us those bones come from species that became extinct millions to billions of years ago.  Dobzhansky (1964) told us about those observers.

“The notion has gained some currency that the only worthwhile biology is molecular biology. All else is “bird watching” or “butterfly collecting.” Bird watching and butterfly collecting are occupations manifestly unworthy of serious scientists! I have heard a man whose official title happens to be Professor of Zoology declare to an assembly of his colleagues that “a good man cannot teach zoology. A good man can teach, of course, only molecular biology.

Such pronunciamentos can be dismissed as merely ridiculous. They are, however, caricatures of opinions entertained by some intelligent and reasonable people, whose views deserve an honest and careful consideration and analysis. Science must cope with new problems that arise and devise new approaches to old problems. Some lines of research become less profitable and less exciting and others more so.”

Indeed, it would be hard to miss the fact that current lines of research are expected to be much more profitable that the observations of theorists. For example, RNA-mediated amino acid substitutions in supercoiled DNA link energy-dependent changes in angstroms to ecosystems. Clearly, if organisms within an ecosystem cannot find food, they will not have the energy to reproduce.

The pheromone-controlled physiology of reproduction will no longer prevent the transgenerational epigenetic inheritance of virus-driven energy theft, and all individuals of the species may eventually become extinct. Observable evidence that some individuals died led observers to claim that many species became extinct during millions of years of evolution. No experimental evidence of biologically-based cause and effect supports those claims. Instead, facts about how quickly virus-driven energy theft continues to degrade their messenger RNA suggests that the fossil record of bones exemplifies how quickly ossification occurs in the absence of sunlight.

Reported as: How the nervous system controls tumor growth

At the dawn of cell differentiation, mitochondria from a particular donor cell may have been the only source of some particular proteins for a new host cell that could no longer make them.

John Hewitt made this fact perfectly clear. Cell type differentiation has always been energy-dependent and biophysically constrained by the physiology of pheromone-controlled reproduction.

Observers claims that fossilized bacteria could be used as evidence to support millions to billions of years of evolution were replaced when chemists provided experimental evidence that the observers were wrong.

Oliver Steinbock and Professor Juan Manuel Garcia-Ruiz of the Consejo Superior de Investigaciones Cientificas (Spanish National Research Council) in Granada, Spain published an article in Wednesday’s edition of Science Advances that shows fossil-like objects grew in natural spring water abundant in the early stages of the planet. But they were inorganic materials that resulted from simple chemical reactions.

If you do not know that all cell type differentiation is energy dependent and receptor-mediated, you are not likely to link LIGHT to viral latency and all biophysically constrained biodiversity on Earth via the herpesvirus entry mediator or any other receptor that protects organized genomes from virus-driven energy theft and genomic entropy.

However, you could still link LIGHT to Dobzhansky’s claims about the light of evolution. Nothing in Biology Makes Any Sense Except in the Light of Evolution

For example, the so-called alpha chains of hemoglobin have identical sequences of amino acids in man and the chimpanzee, but they differ in a single amino acid (out of 141) in the gorilla (p. 127).

Obviously, he was joking about 10 billion years of evolution when he made this claim:

I am a creationist and an evolutionist. Evolution is God’s, or Nature’s, method of Creation.

Anyone who ever linked sunlight to energy-dependent biodiversity on Earth via endogenous RNA interference and the physiology of reproduction knows the difference between jokes about evolution and facts about cell type differentiation. For example, biophysically constrained cell type differentiation is energy-dependent and viruses steal the energy for replication. That’s why all serious scientists have linked  supercoiled DNA to viral latency without making claims about mutations, natural selection, and/or evolution. Serious scientists do not simply link observations from intruments, such as the Multi Unit Spectroscopic Explorer (MUSE) instrument, to missing galaxies. Serious scientists link facts about virus-driven energy theft from mutations to all pathology.

See for example: The major antigenic changes of the influenza virus are primarily caused by a single amino acid near the receptor binding site.