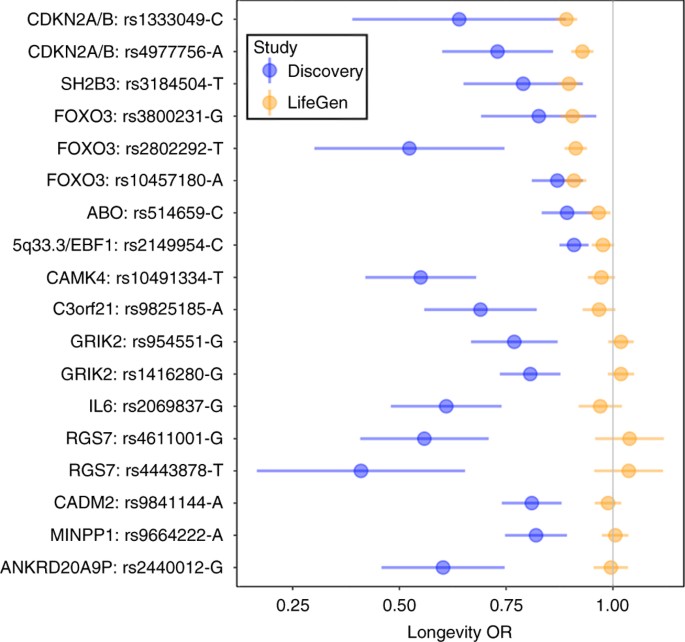 Validation of associations reported elsewhere by lookup in LifeGen. A search of recent literature suggested the gene regions shown here were most likely to harbour associations with lifespan, beyond the four loci identified in Table 2, which are further explored in the Discussion. The most powerful LifeGen analysis (i.e., European ancestry, father and mother combined) was used for validation. The odds ratio (OR) for extreme long-livedness is presented for the reported life-shortening allele (i.e., the OR for long-livedness < 1) in the original study, but not necessarily in LifeGen. The LifeGen OR of being long-lived was estimated empirically on the assumption that the relationship between the LifeGen observed hazard ratio (HR) and the OR is stable across allelic effects, with APOE results from LifeGen and CHARGE-EU 90+ 6 being used to estimate the ratio of ln HR to ln OR (−4.7). These estimates will only fully align with the published ORs if the shape of the effect on lifespan is similar to APOE, as is true under the proportional hazards assumption, nonetheless the pattern is suggestive. Further details are shown in Supplementary Data 3

“Validation of associations reported elsewhere,” includes the detailed associations from 1996 in the molecular epigenetics section of: From fertilization to adult sexual behavior  and in my 2013 refutation of neo-Darwinian theories:

Two additional recent reports link substitution of the amino acid alanine for the amino acid valine (Grossman et al., 2013) to nutrient-dependent pheromone-controlled adaptive evolution. The alanine substitution for valine does not appear to be under any selection pressure in mice. The cause-and-effect relationship was established in mice by comparing the effects of the alanine, which is under selection pressure in humans, via its substitution for valine in mice (Kamberov et al., 2013).

These two reports (Grossman et al., 2013; Kamberov et al., 2013) tell a new short story of adaptive evolution. The story begins with what was probably a nutrient-dependent variant allele that arose in central China approximately 30,000 years ago. The effect of the allele is adaptive and it is manifested in the context of an effect on sweat, skin, hair, and teeth. In other mammals, like the mouse, the effect on sweat, skin, hair, and teeth is due to an epigenetic effect of nutrients on hormones responsible for the tweaking of immense gene networks that metabolize nutrients to pheromones. The pheromones control the nutrient-dependent hormone-dependent organization and activation of reproductive sexual behavior in mammals such as mice and humans, but also in invertebrates as previously indicated. That means the adaptive evolution of the human population, which is detailed in these two reports, is also likely to be nutrient-dependent and pheromone-controlled, since there is no other model for that.

TLR5L616F and EDARV370A demonstrate the power of our framework to move from genomic scans to the characterization of a novel adaptive mutation and elucidation of distinct mechanisms of evolution.

The adaptive variant EDARV370A is associated with straight hair in East Asians.

Characteristics of dental morphology in the Xinjiang Uyghurs and correlation with the EDARV370A variant.

It is perhaps possible that EBV resides within the salivary glands, instead of the epithelium, during latency. This claim is indirectly supported by observations that the East Asian phenotype shares the characteristics of an increased susceptibility to NPC and immature salivary gland morphogenesis, the latter of which is influenced by the association of salivary gland morphogenesis with an evolutionary variant of the human ectodysplasin receptor gene (EDAR), EDARV370A. Whether the immature salivary gland represents a more favorable nidus for EBV is uncertain, but in patients with infectious mononucleosis, EBV has been isolated in this anatomical organ. The presence of EBV-induced lymphoepitheliomas in the salivary glands and lungs further addresses the possibility of submucosal spread of the virus. Adding to the fact that the fossa of Rosen Müller contains a transformative zone active only in the first decade of life, one might be tempted to speculate the possibility of an alternative carcinogenic cascade for NPC that is perhaps not dissimilar to the model of human papillomavirus [HPV] and cervical cancer.

In our population there appears to be a higher-than-previously-reported percentage of HPV-positive results in the cytologic-testing category of “negative [results] with reactive changes.”21-23 This finding may reflect the genetic diversity of our study population, whose demographics were similar to those of the surrounding population of the Bronx county. African American and Latino patients represented 30% and 26% of patients, respectively, whereas whites made up only 17% of the study group. The remainder of the study participants belonged to other ethnic groups, including “mixed ethnicity” and those who did not identify their ethnicity. Alternately, the reactive changes may truly represent early morphologic evidence of HPV infection.

The human ectodysplasin receptor gene (EDAR) variant Val370Ala — also known as rs3827760, also known as 1540T/C, 370A — could be the link from an energy-dependent change in a base pair to the creation of a SNP in the ectodysplasin A receptor EDAR gene on chromosome 2. If so, the pheromone-controlled physiology of reproduction appears to link everything known about ecological variation and ecological adaptation to food energy-dependent RNA-mediated cell type differentiation and the chromosomal inheritance of all morphological and behavioral biodiversity.

See also: miRNA as viral transcription tuners in HPV-mediated cervical carcinogenesis, “…with a special focus on miRs that may regulate expression of the host and viral factors particularly responsible for viral transcription leading to carcinogenic progression of the lesion. Further, the review attempts to assess the therapeutic potential of miR-based strategies in therapeutic targeting of HPV infection during cervical carcinogenesis.”

and Study Indicates 11 Million Men And 3.2 Million Women In US Have Oral HPV Infections

The New York Times (10/16, Bakalar, Subscription Publication) “Well” blog reports that research published in the Annals of Internal Medicine indicated “11 million men and 3.2 million women in the” US have “oral HPV infections.” Among these individuals, “7 million men and 1.4 million women” have “strains that can cause cancers of the throat, tongue and other areas of the head and neck.”

TIME (10/16, Sifferlin) reports that the investigators “note that the number of men with HPV-related cancer of the oropharynx – the tongue, tonsils and back of the throat – has rapidly increased and has already surpassed the incidence of cervical cancer among women.”

Reuters (10/16, Rapaport) reports that the research suggested “men were at the highest risk of developing oral HPV when they had oral sex with other men or also had genital HPV infections.”

CNN (10/16, Scutti) reports the study also found “HPV infections overall and high-risk HPV oral infections in particular were ‘significantly associated’ with cigarette and marijuana use.” While “an HPV vaccine is available for both men and women and can protect against infection…many men are over the eligibility age of 26, and younger men have low vaccination rates.”

Cytology correlations appear to confirm everything known to serious scientists about biophysically constrained viral latency that varies among different human populations. The variations now appear to link more than two decades of published works to the prevention of all pathology via food energy and species-specific pheromones.

See also: Chemosignals from isolated females have antimutagenic effect in dividing the cells of bone marrow from male mice of the CBA strain (2014)

Humans also have various pheromone-induced physiological effects, especially those associated with reproduction [46, 47]. This suggests that the human olfactory system is still an effective pathway for influencing environmental factors on the human nervous system. Various psychoemotional states of the human nervous system can, in turn, disrupt the integrity of the chromosomal apparatus of target cells, for instance lymphocytes [41, 42]. Therefore, studies on the oppositely directional modulation of the mutagenic consequences of stress in rodents with the use of specific, volatile, and zoosocial important chemosignals are a promising approach both to modeling posttraumatic stress disorders in humans [36] and to searching for mehods of their treatment.

Little is known about how genetic variation and epigenetic marks interact to shape differences in behavior. The foraging (for) gene regulates behavioral differences between the rover and sitter Drosophila melanogaster strains, but the molecular mechanisms through which it does so have remained elusive. We show that the epigenetic regulator G9a interacts with for to regulate strain-specific adult foraging behavior through allele-specific histone methylation of a for promoter (pr4). Rovers have higher pr4 H3K9me dimethylation, lower pr4 RNA expression, and higher foraging scores than sitters.

The authors have linked everything known about nutrient stress and social stress from what organism eat to the species-specific pheromones that control the physiology of reproduction and the transgenerational epigenetic inheritance of all morphological and behavioral phenotypes in all living genera. But, they place what is known to serious scientists back into the ridiculous context of a gene-centric theory that attempts to support past claims that genes regulate the energy-dependent production of amino acid substitutions, which they refer to in the context of protein isoforms. They do not link the direct effects from energy to the de novo creation of genes and the behavioral differences that arise only after the genes are epigenetically-effected.

Whether or not you are told that angiogenesis and tumorogeneis are energy-dependent, the use of cancer vaccines and other vaccines for virus-driven pathology should allow you to link food energy from the pheromone-controlled physiology of reproduction to chromosomal inheritance of healthy longevity, or to link the virus-driven degradation of messenger RNA from mutations to all pathology.

If you cannot yet link food energy from the pheromone-controlled physiology of reproduction to healthy longevity in all human populations, see: Korean Red Ginseng extract induces angiogenesis through activation of glucocorticoid receptor

KGE was found capable of inducing angiogenesis both in vivo and in vitro models through activating GR. This study provides a valuable insight into the angiogenic mechanisms depicted by KGE in relation to specific miRNAs.

This group linked the sense of smell in bacteria to the physiology of pheromone-controlled reproduction in all living genera and to our visual perception of energy and mass in the context of the space-time continuum. Anything published since then that does not integrate what is known to all serious scientists about biophysically constrained RNA-mediated protein folding chemistry may appear to be nothing except a desperate plea for more funding.

For a brief review of the current understanding of how virus-driven energy theft causes the degradation of messenger RNA that all serious scientists have linked from mutations to all pathology, see:

Then register for this Webinar, in case I missed something important.

Moving forward, we will see that all genetic associations are energy-dependent and RNA-mediated and that virus-driven energy theft links the degradation of messenger RNA to all pathology.