Will modern human populations adapt to the Zika virus?

The researchers analyzed 20 kalligrammatid fossils (like the one pictured at right), and found striking similarities to butterflies (like the owl butterfly at left).

My comment: These striking similarities must link energy-dependent hydrogen-atom transfer in DNA base pairs in solution to RNA-mediated amino acid substitutions and all biodiversity in primate morphological and behavioral phenotypes via what is currrently known about the claim that Dobzhansky made in 1973.

“…the so-called alpha chains of hemoglobin have identical sequences of amino acids in man and the chimpanzee, but they differ in a single amino acid (out of 141) in the gorilla ( p. 127)”

See also: All in the (bigger) family

Juvenile hormone is thought to be specific to insects, whereas methyl farnesoate is inactive in that group. But researchers have learned that production of both hormones depends on the same rate-limiting enzymes. And Jerome Hui of the Chinese University of Hong Kong found that in both insects and crustaceans, the same set of micro RNAs control expression of the genes for those enzyme

My comment: Theorists seem unwilling to address the fact that striking similarities in butterflies and primates link two nutrient-dependent RNA-mediated amino acid substitutions to weekend evolution of the bacterial flagellum.

One amino acid substitution differentiates our cell types and those of chimpanzees from the cell types of gorillas.

It would be interesting to learn how many amino acid substitutions it takes to differentiate the cell types of butterflies in the context of reports that they evolved from ancestors that lived 50 million years ago via their pheromone-controlled physiology of reproduction, which appears to link atoms to ecosystems in species from microbes to humans. It would also be interesting to learn how neo-Darwinists explain weekend evolution of the bacterial flagellum in the context of their theories about butterflies.

For instance, does virus-driven energy theft link genomic entropy from the Zika virus to the fossil record, or to the changes seen in morphological and behavioral phenotypes of children like these? 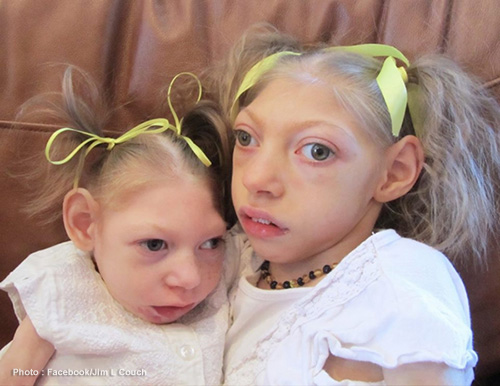 If fossilized skulls of two children like these were found, would neo-Darwinists link the fossil evidence of their morphological phenotypes to a different primate species that automagically evolved into modern humans or to a species that became extinct during the past 6 million years?

For example, fossil record “evidence” of 6 million years of evolution was used in this display of overwhelming ignorance about virus-driven changes that can occur in one generation.

My comment: Everything that serious scientists have learned from cross-fostering experiments in sheep and goats, and from studies of mammary pheromones in rabbits, links classical conditioning of visual input to the epigenetic effects of olfactory input on hormones that affect the development of behavior during life history transitions. The transitions link energy-dependent base pair changes to RNA-mediated amino acid substitutions. The substitutions are linked to morphological and behavioral phenotypes in all living genera.

Remember, all invertebrates have been linked from crustaceans to all insects and to all vertebrates via RNA-mediated events.

This is a hawk moth

Ecological variation in all vertebrates has been linked from biophysically constrained nutrient-dependent RNA-mediated protein folding chemistry to ecological adaptations via amino acid substitutions.

Nutrient-dependent RNA-mediated DNA repair links microRNAs from amino acid substitutions to adhesion proteins and supercoiled DNA, which protects organized genomes from virus-driven entropy in all living genera.  When do you think a neo-Darwinian theorist will look at the big picture and acknowledge that obvious fact?

The genomic storage effect arises as recombination allows alleles at the two loci to escape more harmful genetic backgrounds and associate in haplotypes that persist until environmental conditions change. Using both Monte Carlo simulations and analytical approximations we quantify the strength of the genomic storage effect across a range of selection pressures, recombination rates, plasticity modifier effect sizes, and environmental periods.

Our study suggests there is an assigned region of the brain for memory based on previous experience with objects.

My comment:  They seem to believe there may be an automagical genomic storage effect and trangenerational epigenetic inheritance of top-down causation, which must link atoms to ecosystems in all living genera.

That belief was the basis for neo-Darwinian claims about evolution. But, since their theories have no explanatory power in the context of biologically-based cause and effect, theorists are trying to find something else to call it. Fortunately for all biologically uninformed neo-Darwinian theorists, there are many others who will believe that past experiences can be linked to the “Genomic Storage Effect.” That effect can then be linked to affects on recognition and memory outside the context of anything known to serious scientists about hormone-organized and hormone-activated behaviors during life history transitions.

The alternative to linking Genomic Storage Effect to past experiences and affects on behavior is to learn about how top-down causation is linked to RNA-mediated biologically-based cause and effects on hormones that affect behavior in all vertebrates and invertebrates. Indeed, every other study of mammals links all studies of all species from atoms to ecosystems via nutrient-dependent RNA-mediated protein folding chemistry and the physiology of reproduction.