Building delicious base pairs in class. It's elementary Watson and Crick 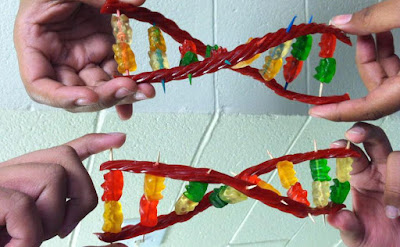 This might be the best way to show students that base pair changes are nutrient energy-dependent and biophysically constrained by autophagy in the context of the physiology of reproduction, which links them to chromosomes as the units of transgenerational epigenetic inheritance.
For example, the educator could start by telling them that if the base pair changes were not biophysically constrained by the chemistry of RNA-mediated protein folding, the students wouldn’t be here to do this — and no other species on Earth would ever have existed. That might make the students ask questions about how they evolved — if that’s what they were taught to believe.

Perhaps Bill Nye “the science guy” will explain that with candy in the context of the evolution of dinosaurs to birds via definitions and assumptions. He could tell them that even if they don’t eat they might evolve, and to ask their parents about that.

I mention it because my sister told me that I should not have told her grandson that Bill Nye knows less about science than anyone I know. She wants my great nephew to learn to discern things like that for himself.

My nephew’s ability to build functional structures with Lego might lead to discernment that links physics from chemistry to molecular epigenetics in the context of what happens when one or more “Legos” or “gummy bears” is broken or missing.

That would exemplify how virus-driven energy theft causes all pathology. The difference is that he could eat the “gummy bears” and link nutrient-energy dependent biophysically constrained RNA-mediated protein folding chemistry to all healthy longevity via what is known to serious scientists about the structure and function of supercoiled DNA.

Students can learn about this from their candy lesson. Facts about the energy-dependent structure and function of supercoiled DNA could be taught with candy at an early age. If so, it would probably be very difficult to teach students to believe virus-driven energy theft could link mutations to increasing organismal complexity via natural selection and evolution.

Obviously, some students would ask where the energy comes from that must be used to build functional structures. That might lead others to ask other questions and learn more about different disciplines. Some might learn to link physics and chemistry to the biology of cause and effect on an as-needed basis. They could teach others how  to refute the pseudoscientific nonsense of neo-Darwinian theories.

For example, they could start with the fact that his “conditions of life” were the basis for Darwin’s theory, and Darwin knew nothing about mutations. Does anyone think Darwin would have linked de Vries 1902 definition of mutation from assumptions to what Darwin knew about biodiversity? Do you think Darwin would have claimed that eating candy, or other sources of glucose was less important than natural selection?

Keep in mind that no one has explained where the energy came from that is in hydrogen atoms despite the fact that it has been linked to DNA fluorescence and the weekend resurrection of the bacterial flagellum in P. fluorescens and also fluorescence in dinosaur bone osteocytes that were dated to be ~65 million years old.

That suggests the Candy lesson could explain much more than biologically-based cause and effect. It could explain how energy as information also is linked from base pairs to amino acid substitutions and changes in receptor-mediated behavior in all genera via their physiology of reproduction and transgenerational epigenetic inheritance.

Until educators change their lesson plans, I’d like everyone to know how far creation science has come and what better way isthere to say it than with candy. See for example:  Researchers discover that DNA naturally fluoresces

I will suggest what you can say with flowers, later. But first, see this: A third of Americans don’t believe in evolution

Ecological adaptation occurs via the epigenetic effects of nutrients on alternative splicings of pre-mRNA which result in amino acid substitutions that differentiate all cell types of all individuals of all species. The control of the differences in cell types occurs via the metabolism of the nutrients to chemical signals that control the physiology of reproduction.

These facts do not refute evolution; they simply refute the ridiculous theory of mutation-initiated natural selection that most people here were taught to believe is the theory of evolution.

That theory is far too ridiculous to be anything but a joke in the context of biological-based increasing organismal complexity. But here, we have lots of jokers, don’t we? The proof of ecological variation that appears to refute the theory of evolution, which actually refutes itself, is that ecological adaptations occur too fast for mutations to compete with them as a source of anything but diseases and disorders.

See for example of the joke: Neil deGrasse Tyson explains how humans will evolve in the future
Subscribe
Login
0 Comments
Inline Feedbacks
View all comments